Seen the film? Send us your reviews! 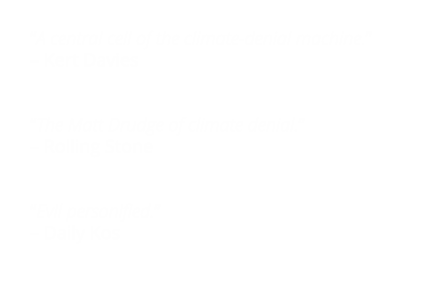 Featuring the Climate Hustler
And Publisher of ClimateDepot.com

"I'm not a scientist, although I do I play one on TV occasionally. Okay, hell, maybe more than occasionally.” – Marc Morano

Marc Morano has accused climate scientists of a “con job” and said: "I seriously believe we should kick them while they're down" ... "They deserve to be publicly flogged." online casino canada

Morano started his career as a door-to-door salesman hawking gutter systems. Arguably, he never left the gutter business. He ascended through the ranks of right wing extremism, first as “Our Man in Washington” for Rush Limbaugh, then as GOP staffer at the Senate Committee on Environment and Public Works, where he helped Sen. James Inhofe perpetuate the myth that “manmade global warming is the greatest hoax ever perpetrated on the American public.” online casino ireland

While Climate Hustle claims to feature interviews with scientists, Morano fails to explain that these characters are not among the respected mainstream climate science community, but rather a collection of washed-up scientists with no expertise in climate science, or a biased view based on ideological or industry-funded bias.

Marc Morano is the executive director and chief correspondent of ClimateDepot.com, a project of the Committee for a Constructive Tomorrow (CFACT). Morano is also the Communications Director at CFACT, which has received funding from oil giants ExxonMobil and Chevron among other fossil fuel interests. According to 2011 IRS Forms (PDF), Morano was the highest paid staff member at CFACT with a salary of $150,000 per year. Morano's blog Climate Depot regularly publishes articles questioning man-made global warming. Although he has no scientific expertise in the area, Morano has become a prominent climate change denier. He has been called “the Matt Drudge of climate denial”, the “King of the skeptics,” and a “central cell of the climate-denial machine.” He was also listed as one of 17 top “climate killers” by Rolling Stone Magazine. He has accused climate scientists of “fear mongering,” and has claimed that proponents of man-made global warming are “funded to the tune of $50 billion.” For more information about the climate hustler Marc Morano, check out his DeSmogBlog profile.

The Washington-DC-based Committee for a Constructive Tomorrow (CFACT) is a tax-exempt 501(c)(3) organization founded in 1985. The conservative think-tank in Washington D.C. has received funding from ExxonMobil, Chevron, as well as hundreds of thousands of dollars from foundations associated with Richard Mellon Scaife. CFACT has also received at least $7.8 million in dark money through DonorsTrust and Donors Capital Fund. CFACT's position on climate change is CO2 is “beneficial” to plants and wildlife and therefore, “Regulating carbon dioxide may be profitable for certain industries and governments, but will impose enormous costs on society – while having no effect on our weather and climate.” CFACT has also suggested that the earth may be “cooling” and therefore CO2 is a “benefit”: “Many climatologists and astrophysicists believe recent sun spot, Pacific Ocean and global temperature trends suggest that our planet may have entered a cool phase that could last for 25 years. If that is the case, the additional carbon dioxide being emitted by China, India and other developing countries could bring a major additional benefit: helping to protect wildlife habitats, enhance oceanic biota and preserve crop yields under sub-optimal climatic conditions.” Find out more about CFACT in the DeSmogBlog profile on Committee for a Constructive Tomorrow (CFACT).